There's no need to open one more boring red wine instead of 19 Crimes wines. It is terrific, and one of the best parts about it is the gorgeous labeling with AUGMENTED REALITY (AP) app to show animated artwork in the real world.

Not drinking this wine? Now that would be criminal.

Check out the new AR experience & bring the bottles to life.

"This augmented reality app was released"

When a phone’s camera is pointed at a bottle in the app, the character on the label becomes animated and begins to tell their story. 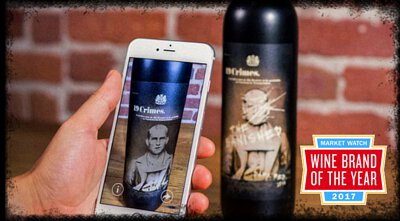 19 Crimes, has been named ‘Wine Brand of the Year’ by leading US wine industry title Market Watch.

The Story Behind The Talking Labels

The men featured on our wine labels are not those of fiction. They were flesh and blood. Criminals, artists and scholars. In history, they share a bond – receiving "punishment by transportation" for violation of one of 19 crimes and becoming the first settlers of a new nation.

Nineteen crimes turned criminals into colonists. Upon Conviction British rouges guilty of a least one of the 19 crimes were sentenced to live in Australia, rather than death. This punishment by "transportation" began in 1783 and many of the lawless died at sea. For the rough-hewn prers who made it to shore, a new world awaited.

As pioneers in a frontier penal colony, they forged a new country and new lives, brick by brick. This wine celebrates the rules they broke and the culture they built.

"19 Crimes - That Could Get Them Sent To Australia"